‘Love Byrd’ celebrates the work and legacy of trumpeter Donald Byrd. From hard-bop to jazz/soul/funk, Donald Byrd took jazz and jazz listeners to another space in the 70s and early 80s. In 1981 Donald Byrd along with his 125th Street, N.Y.C. band released the soulful, jazz-tinged “Love Byrd” LP produced by the legendary Isaac Hayes. By the late 90s “Love Byrd” became a highly sought after rare groove classic LP by DJs and rare groovers worldwide. By the 80s Donald Byrd had already transitioned from his hard-bop jazz roots to a more soul/funk groove. That transition and groove can be credited to his collaborations with the Mizell Brothers (Blue Note Records) in the 70s. 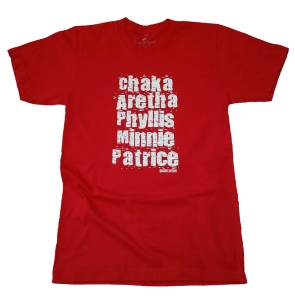 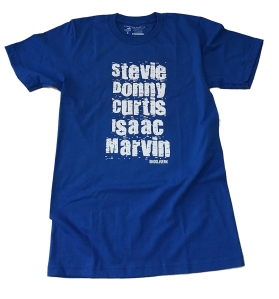 Iconic Soul Tees by Skoolwerk Apparel are back in stock! Order your tees today at SkoolwerkApparel.bigcartel.com.

Iconic Soul Men was created to celebrate the work and impact of Stevie Wonder, Donny Hathaway, Curtis Mayfield, Isaac Hayes and Marvin Gaye. These five legendary soul singers and the music they created has stood the test of time generation after generation. Their style and creative vision has become a blueprint for soul music makers today.

The Stax Museum of American Soul Music, located at the original site of Stax Records, 926 E McLemore Ave in Memphis, Tennessee, pays tribute to all of the artists who recorded there with a rare and amazing collection of more than 2,000 interactive exhibits, films, artifacts, items of memorabilia and galleries designed to keep Stax alive forever.

Recently Tim Sampson, the communications director for the Soulsville Foundation, the foundation responsible for preserving the history of Stax Records in the museum, selected his top five music artifacts and gave a story behind them. One of his selected artifacts was Isaac Hayes’ 1972 Cadillac El Dorado. Below is what Tim Sampson had to say about one of the most popular exhibits in the museum.

“Cadillac gave Isaac Hayes this car in 1972 as a reward for his Hot Buttered Soul album and as a PR stunt to go with the release of the Black Moses album. It’s trimmed with gold and lined with white fur and even has a refrigerator and a TV in it. I don’t know how long he had it for, but I know he drove it around town. It’s one of our most popular exhibits. I’ve never driven it, but I’ve sat in it.”